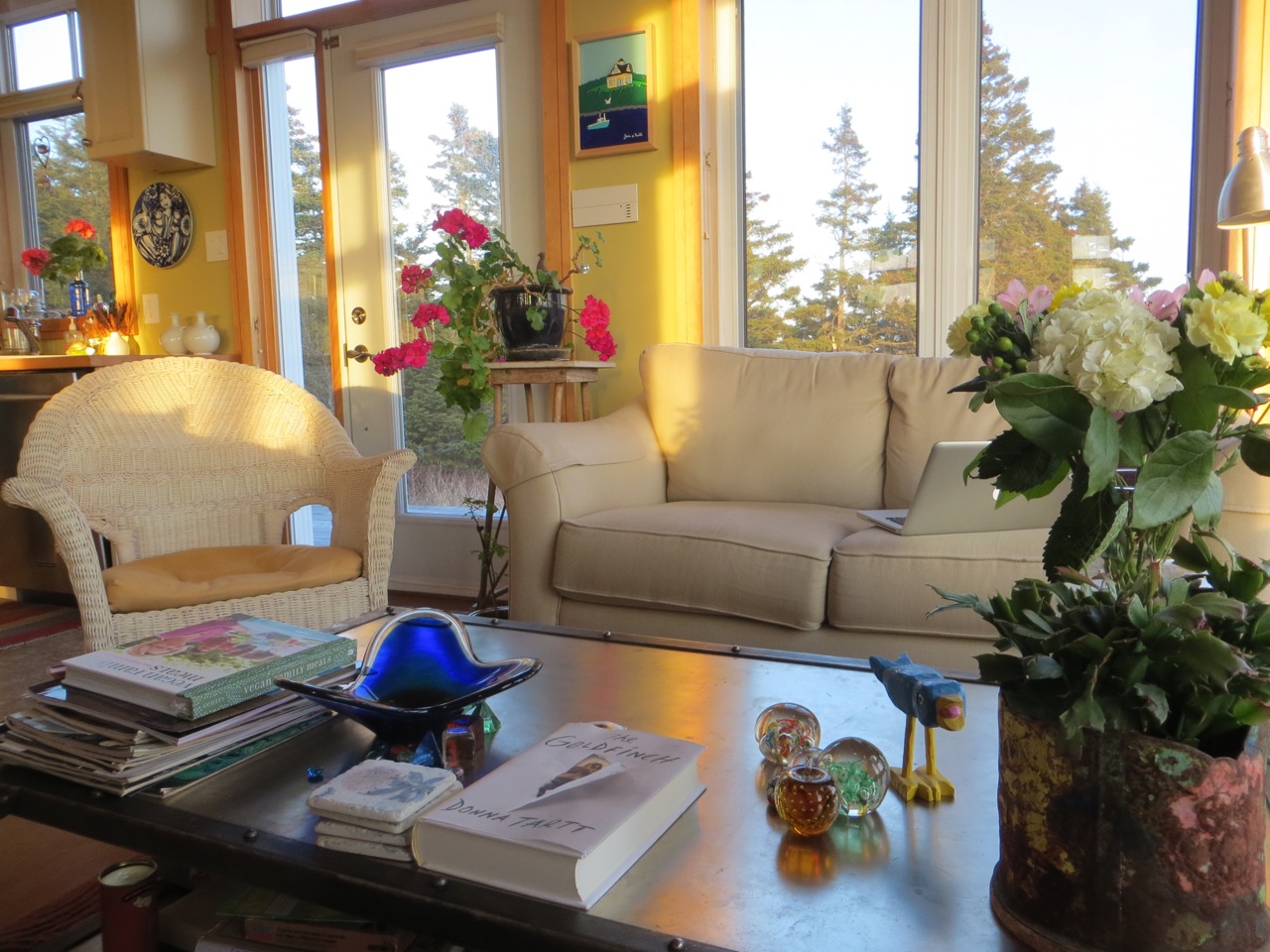 The view from my new “perch” on the couch, leg elevated on the back cushions…Much better than the hotel view…and many more people have appeared into this space, but alas, being less mobile, I never thought to jump up and get my camera. Richard brought flowers, sweet man, and Joan and Nicole visited with the incredibly sunny Alexa…and Val and Ikey came by to welcome us back. Pleasant day despite this unpleasant situation. 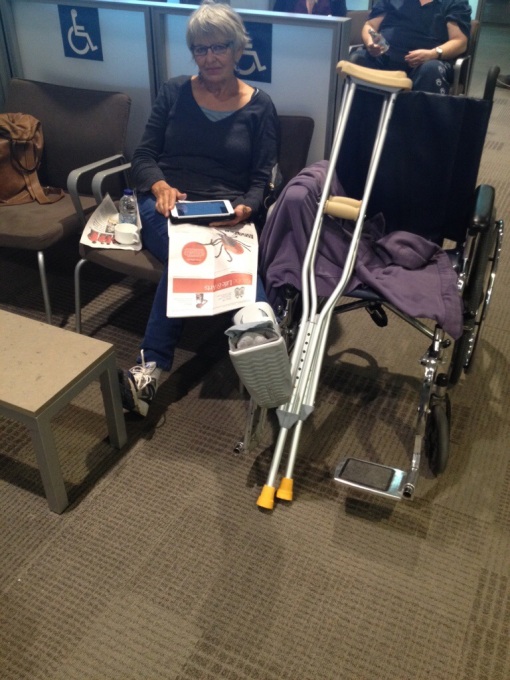 Waiting at the airport…hanging out for hours as there isn’t much else to do in the rain, on wobbly armed crutches. Sad to not be flying to L.A. as planned. Crutches and I are still at odds and that’s sort of rough, makes me exhausted. So, new advice: make your body strong before you should be in this spot. And don’t wear clogs. 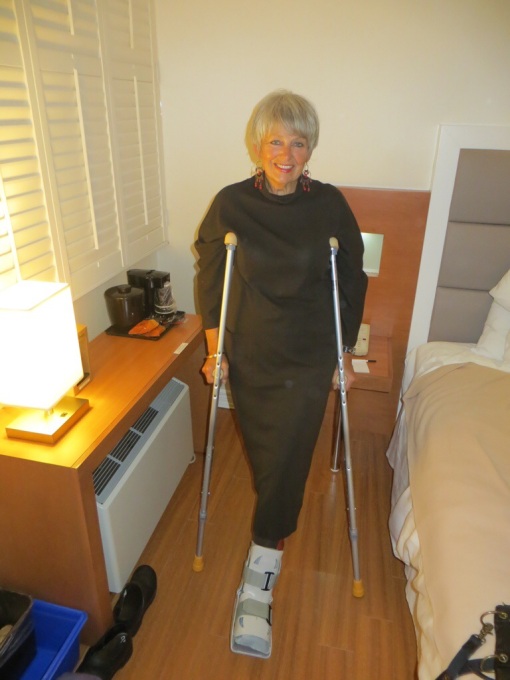 I know, this doesn’t look good. It isn’t. I broke my left foot between the toes and ankle after going over on that foot when I met up with a part of a broken sidewalk. Toronto can be dangerous, you know. Can’t put weight on the cast and so far terribly klutzy on the crutches..sort of like a fear of being out of control. Meanwhile Frank convinced me to join his dinner meeting at the Ritz Carleton…and because I was at the end of the table in order to have my foot elevated, I managed to get a really good look at former prime minister Brian Mulroney, beautiful wife Mila and handsome son, who were all eating there too. So…good broken foot karma happening there. Sadly this also means we’re returning to N.S. for the foot follow up, and not going on to L.A.. Laughed when someone suggested that I’d have a lot of time to read! I want time to garden. I think I read plenty enough in Portugal. I wanted time to cuddle American grandchildren. But then there was the Brian karma, so other good things might happen too. And as always, it could have been so much worse. A face plant rather than a foot plant, for instance. 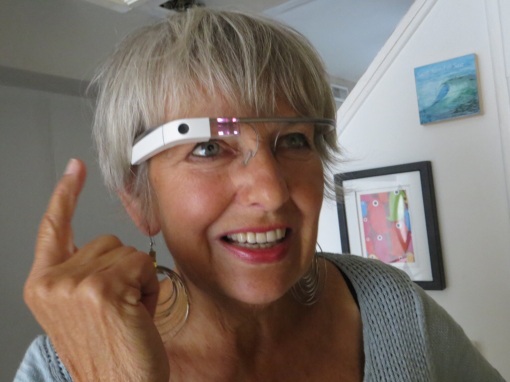 At Ryan and Tori’s, wearing crazy Google glasses. Ryan’s company is one of three companies in Canada working on developing game apps for these futuristic devices. You get used to talking to the glasses..weird but true. 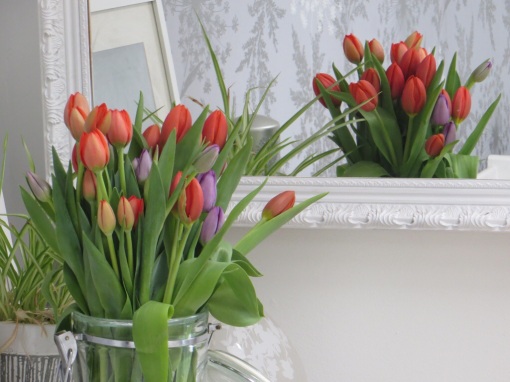 A hit of spring in their home.. 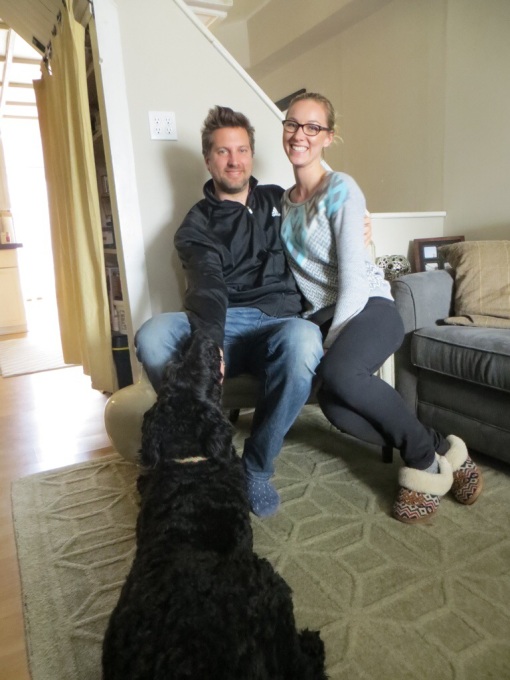 Never seems to be enough time with these two! But always lovely to catch up however briefly. 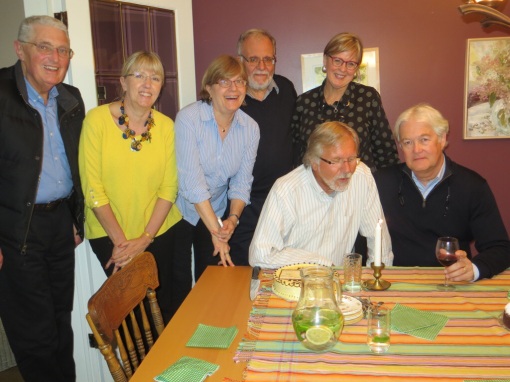 We flew to Ontario..it wouldn’t do to get settled in. A quick hug first at the Halifax airport with Anna…unfortunately we don’t have clones so that we can’t be in a few places at once, and she was arriving as we were leaving! Once in Toronto we bravely faced the traffic and made our way to Frank’s sister Lis’s and an impromptu birthday party for Frank, with sister Judy and friend Anne Marie and husbands/ partners. What an excellent time! Family and friends, there’s the ticket. And great food. This entire group are all foodies. 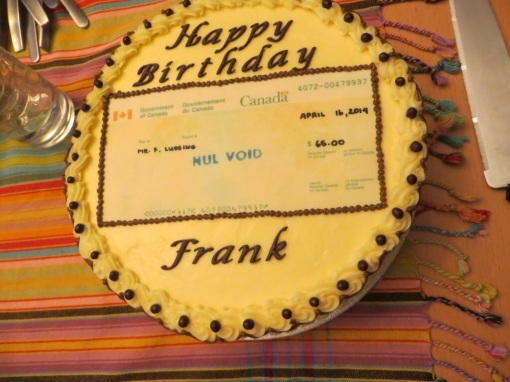 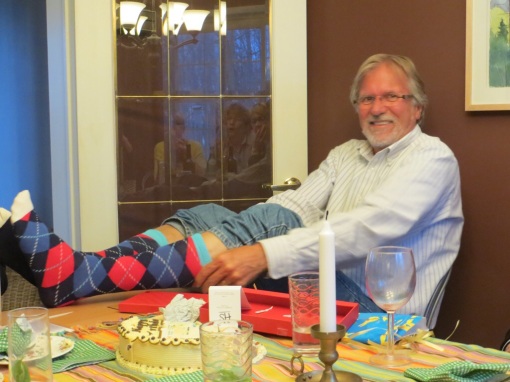 Gifts are fun too. 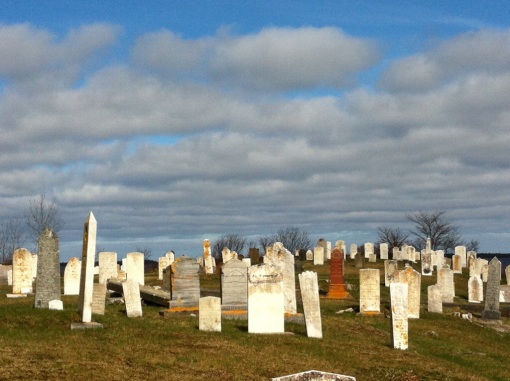 Visiting Marianne at her cottage in Port Medway. The cemetery is very old, very historic. Annually there is a fund raising art show to help preserve this cemetery, and Marianne and a plethora of other local artists contribute work for it.
I do love “hangin’” with creative souls. 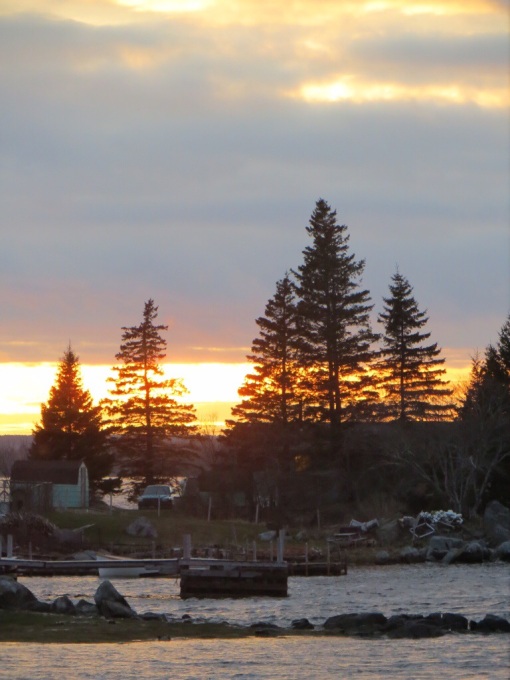 The cottage seems to float over the sea, and delightfully, has west facing windows. I can only stay rooted in my chair until the sky has darkened. Nice to do with good company too. 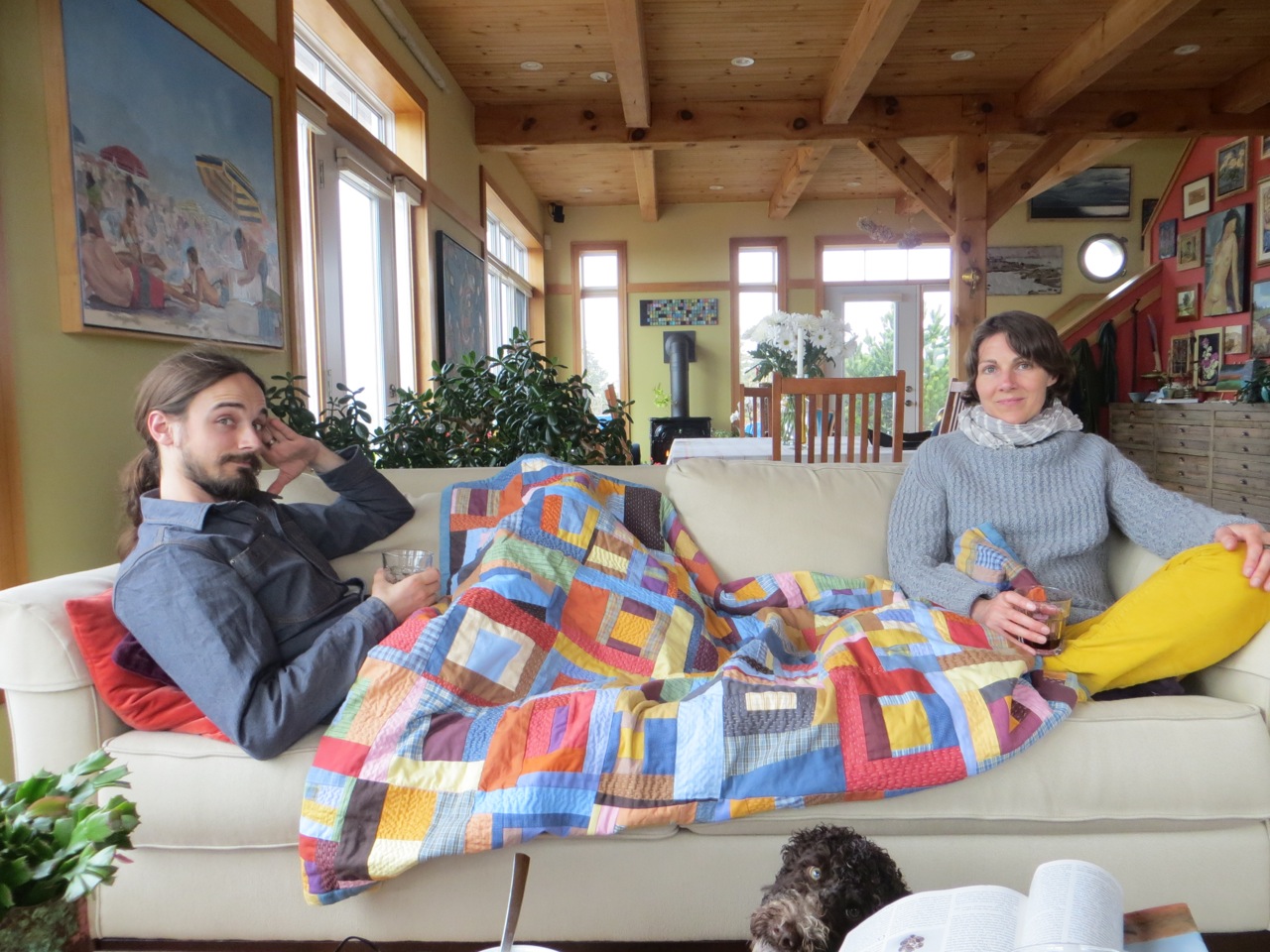 “Wine at 5” might work for “the Blue Zone” book on longevity, but wine at 2 works well too! these three seem very comfortable, despite fierce winds, heavy rain, then freezing rain…all that is just a Nova Scotia day and maybe it’s just for them…Laura could be missing this weather! (maybe yes, maybe no).. 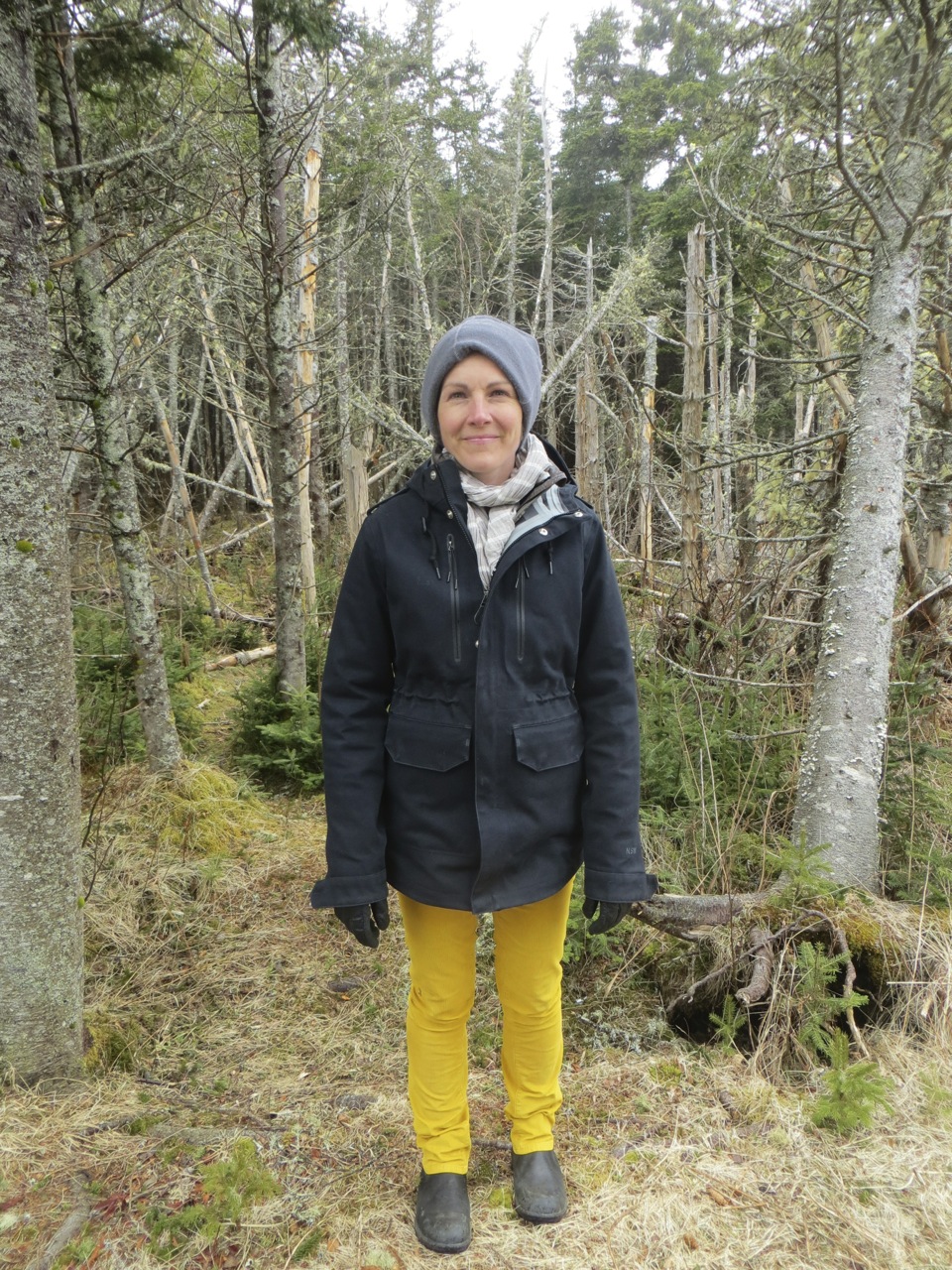 Laura, Cody and hound Potter are visiting from the States. The weather today was rainy, but they took it  all in stride… 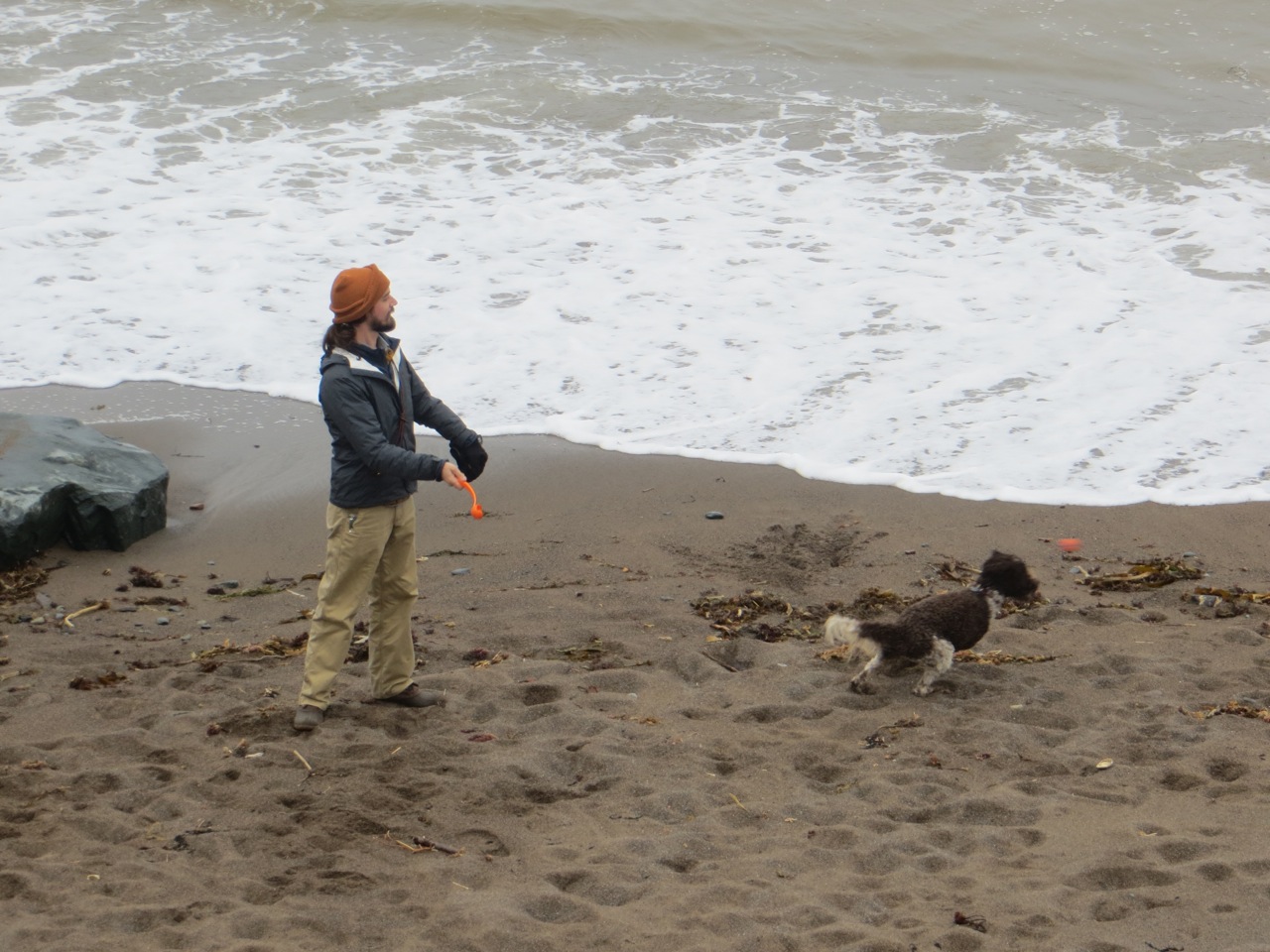 Cody tossed the ball for Potter..who flew after it. Potter loves the ocean…his genes know he’s meant for water. 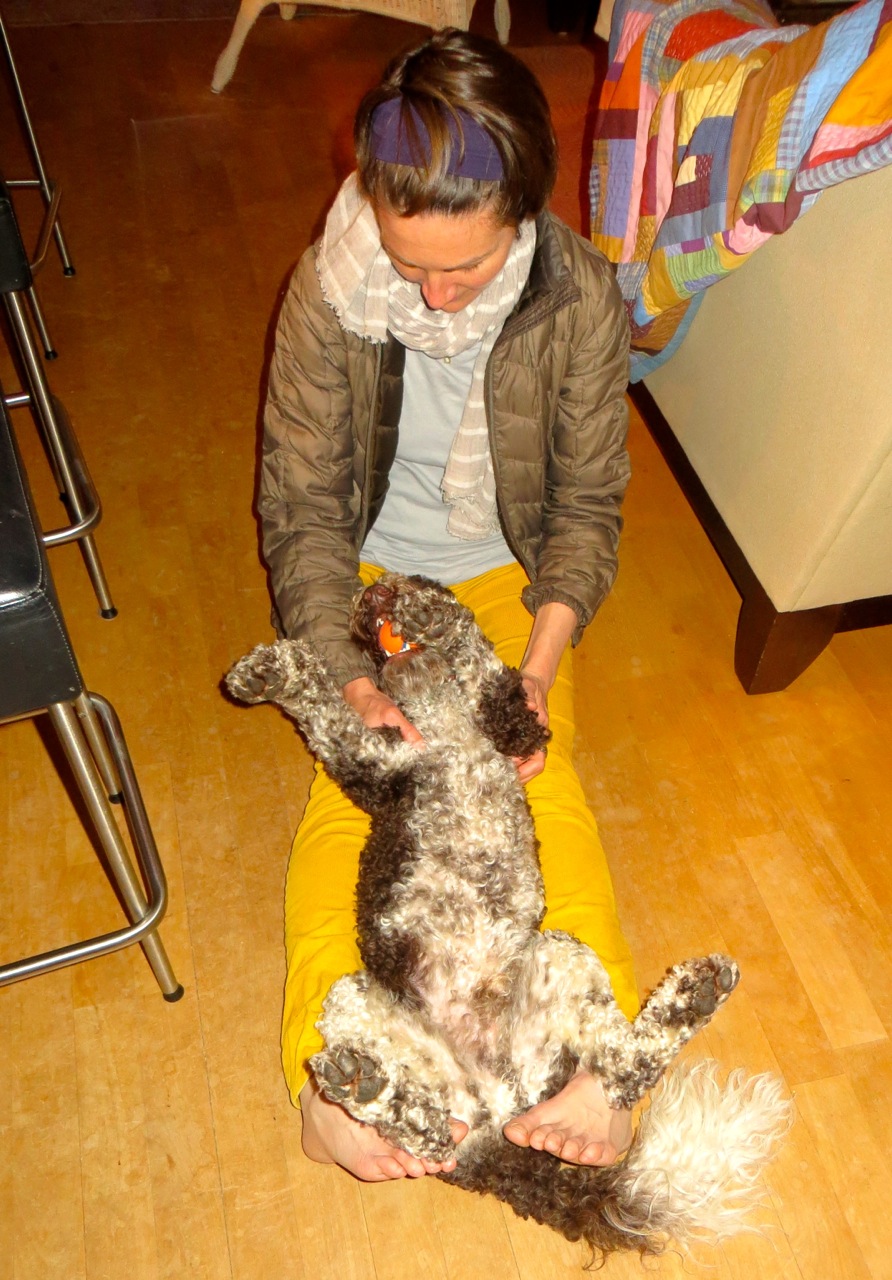 Potter’s relaxing after the long walk..ball still in his mouth. Fun trio to have visiting. 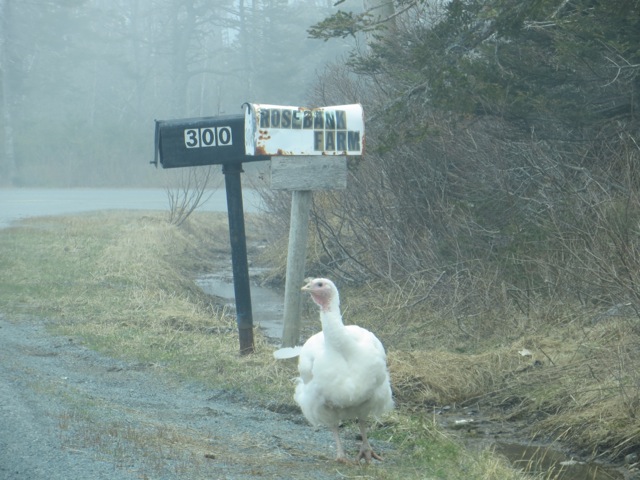 Seen, a free range turkey…very free. Probably out looking for a mate for some free lovin’… 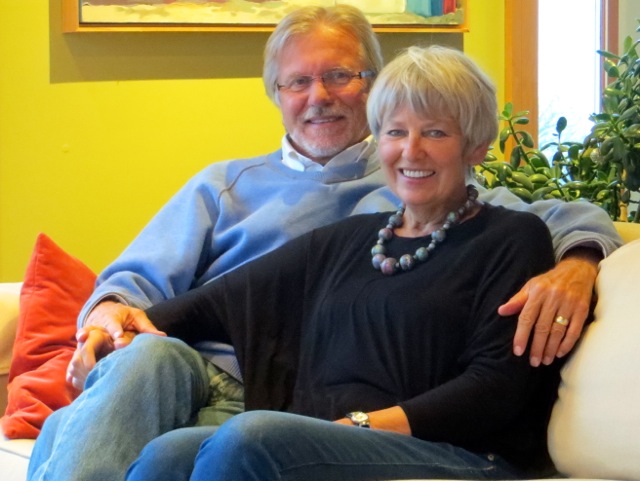 Speaking of which, or about love at least, we had our 44th anniversary today. We married on the first Earth Day. Glad to see it’s continued as well. Pretty special, both things. 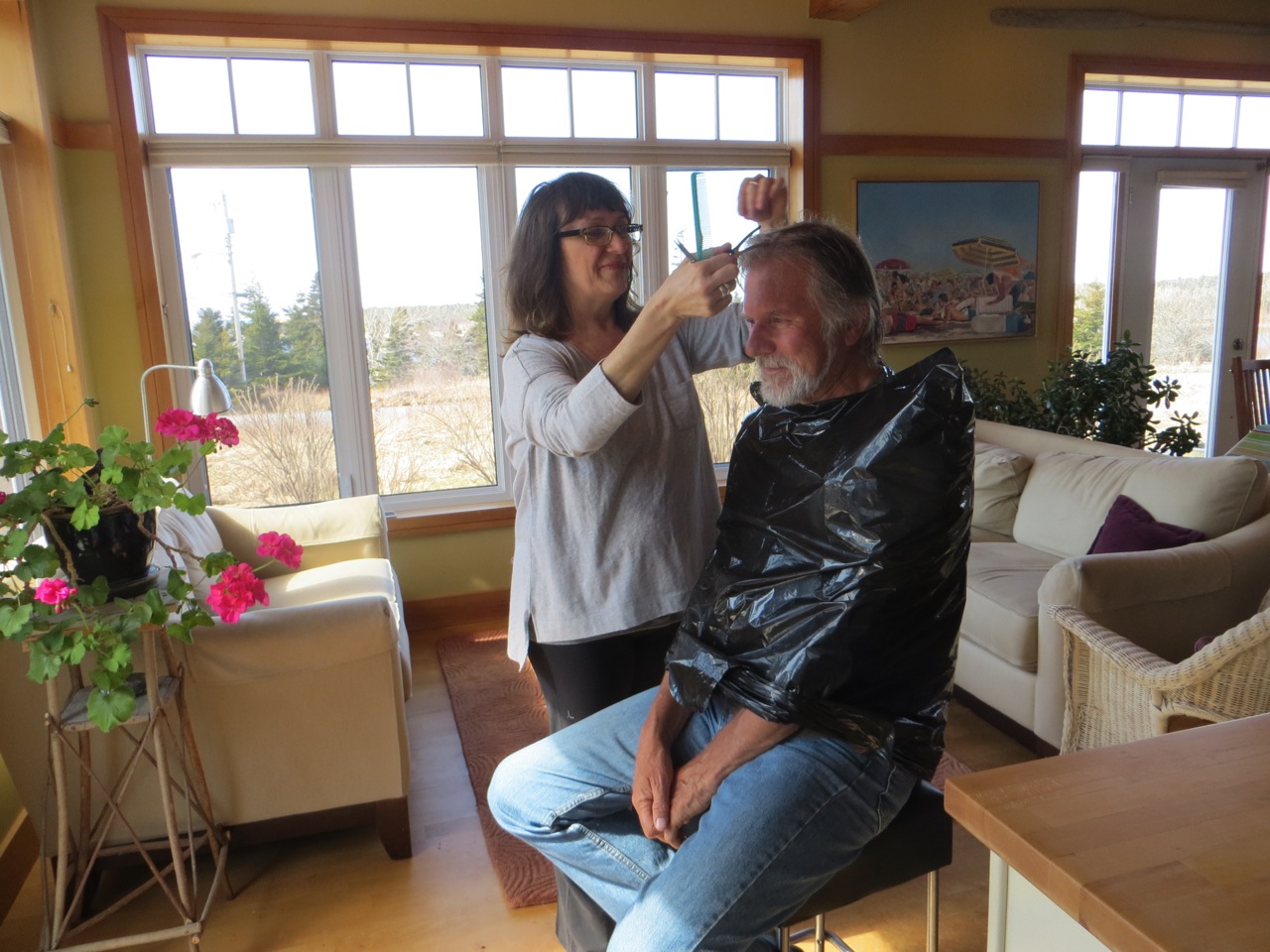 It’s a wonderful thing to have a personal hairdresser… Marianne gave Frank a hair cut for his birthday gift. The gift was also for me, keeping Frank’s hair trimmed but still longish, the way I love it. After all, I look at Frank more than he does himself. 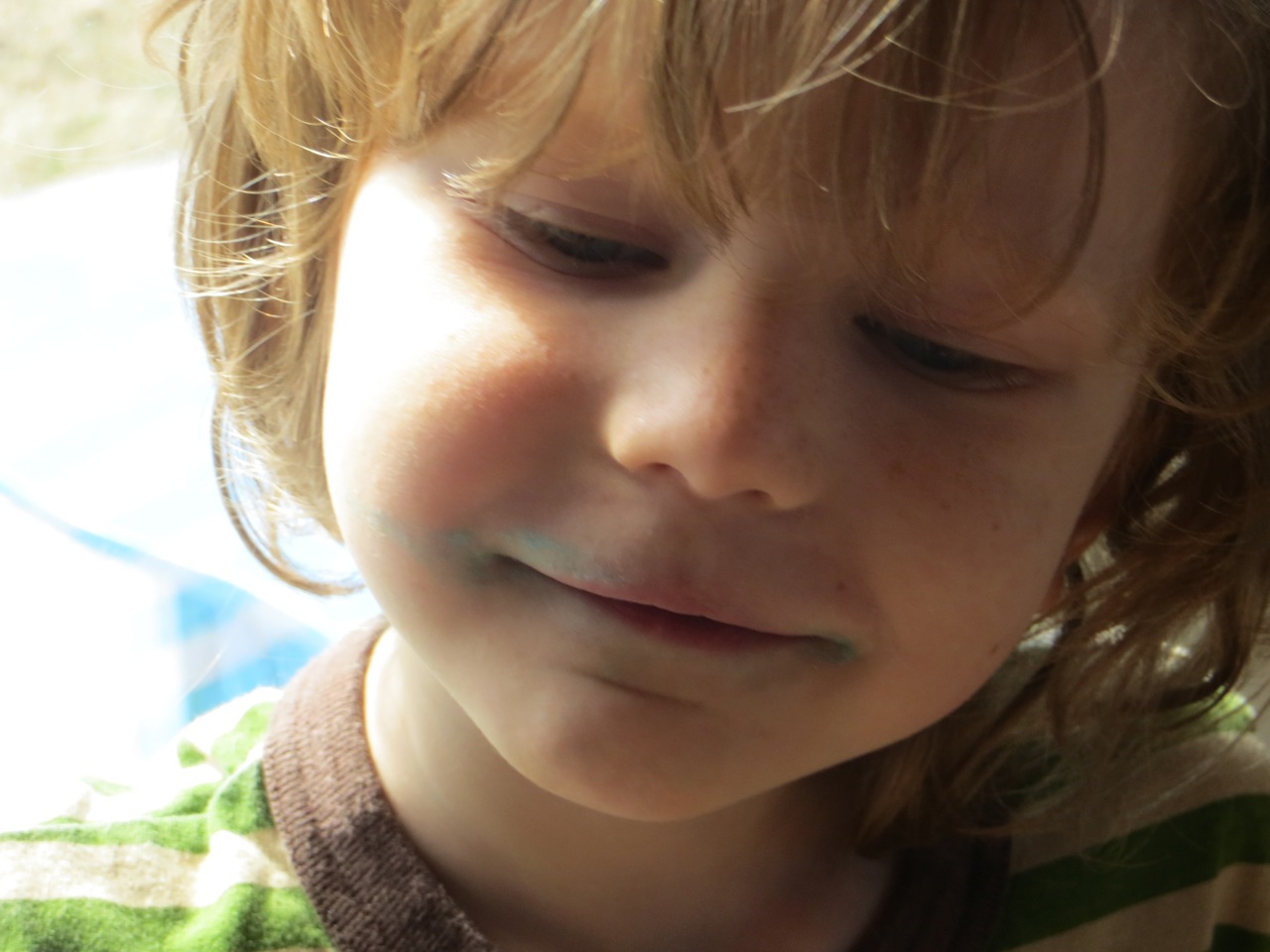 This looks like the face of Easter Monday…a face only parents and grandparents could love. Goodbye Easter….see you next year.